Sei in Home HISTORY OF THEATER

Trianon is the name of the village bought and then destroyed by Louis XIV of France to annex it to the park of the Palace of Versailles. In this luxuriant place, the Sun King commissioned Louis Le Vau to build “a house where to have a snack”, where he could escape with his family, far from the etiquette and toils of power. This was only the beginning of the development of the area as a royal retreat, where in the same time the Grand and Petit Trianon were built, as well as the Hameau de la Reine, the “Queen’s village”, where the sovereign played at being a shepherdess. The Duke of Croÿ commented: “Never have two hectares of land changed so much shape, nor cost so much money”.

In the last century the toponym, which recalls the regal delights of Versailles, is used to name the theatre, which was created to support the real estate development of the elegant new insula of the Risanamento (literally, making healthy again). Close to the “Rettifilo” – the large street called Corso Umberto I, inspired by the successful French urban planning model of the boulevard – the building stands in the Magna Graecia area of the Forcella district, the vital heart of the ancient centre of Naples, which has been declared a UNESCO World Heritage Site. 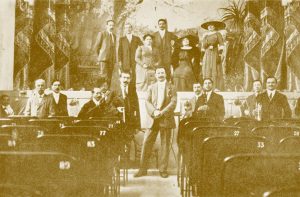 Right in front of Piazza Vincenzo Calenda – “an emblematic space in the urban history of Naples and its transformations over time” according to archaeologist Daniela Giampaola – there are some ruins of the city walls of Neapolis (between the 3rd and 4th centuries BC), which popular tradition calls ‘o cippo a Furcella and that collective imaginary uses to emphasize the age of something (“S’arricorda ‘o cippo a Furcella!”, literally something or someone truly old). In continuity with this historical vestige, inside the theatre there is the only watchtower still existing in Naples, located to guard the Furcillensis (or Herculanensis) Gate, and incorporated into the structure by the builder and first owner of the theatre, Amadio Salsi, an entrepreneur from Vignola.
This tower is famous as Tower of the Siren, so named to evoke the ancient city centre’s founding myth of Parthenope and her charmer song. 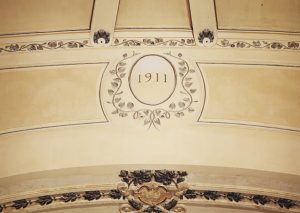 The reinforced concrete tectonic system, one of the first examples in Italy, was a precursor to Pier Luigi Nervi and Arnaldo Foschini’s Augusteo Theatre in Naples (1926-29).

On 8 November 1911, the theatre was inaugurated with Eduardo Scarpetta‘s successful comedy Miseria e Nobiltà (Misery and Nobility), with the passing of the baton from the author and first performer to his son Vincenzo, who thus made his debut in the leading role of Felice Sciosciammocca (Eduardo had abandoned the stage, tired of the long legal dispute – which he won – brought against him by Gabriele d’Annunzio for the staging of Figlio di Iorio, an irreverent parody of the Vate’s Figlia di Iorio).

“It was Eduardo Scarpetta’s company, which included his son Vincenzo, Bianchina De Crescenzo, Della Rossa and Perrella, that inaugurated the theatre. […]

From the January following its inauguration, the theatre put on variety shows, whose programmes often featured, in addition to leading singers, as many as three, and even four, vedettes at a time. In a single evening, the public enjoyed, in addition to the acts that usually crowded the billboard, Pasquariello, Donnarumma, Gill, Fulvia Musette and, a few weeks later, Maldacea, Tecla Scarano, Diego Giannini and Gina De Chamery. First with the enterprise of Amodio Salsi, who was also the owner of the theatre, and then with that of Giuseppe De Simone and Gennaro De Falco, the Trianon recorded an activity rich in artistic events and financial satisfaction. […] Not a few actors, and not a few singers, were forged on its stage, achieving lasting fame. And not a few actors and singers ended their wonderful artistic careers here, such as the already mentioned Armando Gill and Elvira Donnarumma.”

In its rich 100-year history, the Trianon offers a wide range of programming – such as opera, operetta, drama, comedy and variety – hosting all the main artists of the 20th century Neapolitan theatre and music scene, from Totò to Mario Merola, who made his debut at the Trianon after winning a competition for new voices in 1959. The presence of the major theatrical families, from De Filippo to Viviani, from Fumo to Maggio, makes this theatre a reference point for traditional acting.

In the 1930s, with the resident company of Salvatore Cafiero and Eugenio Fumo, the theatre also had its own characterisation as the stage of choice for the canzone sceneggiata, or more simply sceneggiata, the genre of musical theatre that subsequently had a popular revival in the 1970s. 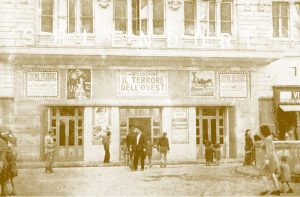 During the Fascist era, the theatre changed its name to “Trionfale“, in deference to the linguistic autarchy imposed by the regime. In 1940 Gustavo Cuccurullo bought it and in 1947 transformed it into the Splendore cinema, taking advantage of the growing popular interest in the seventh art, whose success was, just two years later, confirmed by the film Catene by Raffaello Matarazzo, transposition of the screenplay Lacreme napulitane.
Having become a red-light cinema in the 1990s, the hall was restored to its former theatrical function by another Gustavo Cuccurullo, great-grandson of the previous one. The renovation was designed by architect Massimo Esposito, who also restored the Magna Graecia ruins hosted inside to collective use, emblematically renamed Tower of the Siren inspired by the myth of Parthenope. The new Trianon was inaugurated on 7 December 2002 with Eden Teatro by Raffaele Viviani, in a “melodramatic rewriting” and directed by Roberto De Simone.

With the artistic advice of Peppe Vessicchio, in 2003 the theatre also presented a new production of La Cantata dei Pastori directed and performed by Peppe Barra, with scenographer Lele Luzzati signing one of his last works. The production won the Eti – Olimpici del teatro award for “best musical comedy” (2004).
In April 2006, “‘O Trianon” – as it has always been affectionately called by the Neapolitans – became entirely public and was dedicated to the playwright and actor Raffaele Viviani, one of the greatest artists ever who performed on this stage. Nino D’Angelo was the artistic director, followed by Giorgio Verdelli and then D’Angelo again.

After a troubled period of economic-financial difficulties, which saw the production stopped for two years and a half, and the theatre on the verge of bankruptcy and auction, Trianon Viviani is back in business, administered by the homonymous foundation under the direction and coordination of the Campania Region, which holds a share of 80.40%; the other founding partner is the Metropolitan City of Naples, with a share of 19.60%.

The foundation, chaired by Giovanni Pinto, has the mission of enhancing the most relevant and internationally known endogenous cultural asset, the Neapolitan song (or Canzone Napoletana), between tradition and contemporaneity.
The artistic director for the three-year period 2020-2022 is Marisa Laurito, who aims to create an active space of cultural and social animation, attentive to the traditional heritage as well as to new languages, a unique production pole that also intends to position itself positively in the broader tourism and leisure market